Andrew Jordan was distinguished with the highest honour of the city of Rio de Janeiro.

The Medal of Merit Pedro Ernesto is the main tribute that Rio de Janeiro pays to those who most stands out in Brazilian society or at an international level.

The award was named in recognition of the work of the doctor and politician Pedro Ernesto, prefect in the period between 1931 and 1936 and a great defender of social policies.

In August 1942, his death was acknowledge in the pages of Time Magazine and Pedro Ernesto was portrayed as «the most beloved man in Brazil». 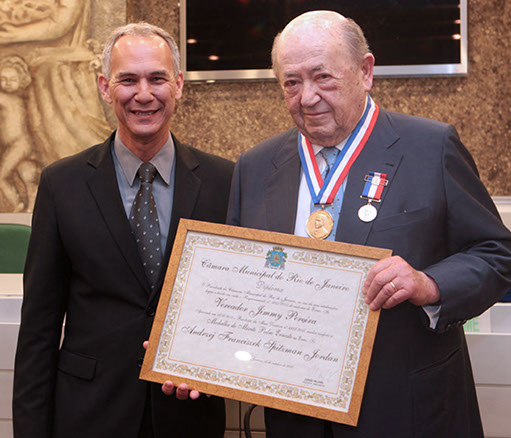 Since May 2016, a new work of urban in Estoril, Portugal, pays tribute to Jan Karski (1914 - 2000) and his friends Jerzy Jan Lerski (1917 - 1992) and Jan Nowak-Jeziorański (1914 - 2005). The three famous Polish intellectuals actively participated in the resistance against the German occupation, working underground to fuel the Polish government in exile and the allies with valuable information for the development of the war against the Nazis.

In the commemorative plaque of the sculpture, we can read: «It is thanks to these men and the other anonymous heroes that the terror of the Second World War was stopped at an earlier moment. Their courage and wisdom contributed to the foundation of the transatlantic system. Seventy years later, the Atlanticism remains the key factor to peace and stability of the European nations.»

Resulting from a collaboration of the Polish Embassy in Portugal with the Mayor of Cascais, and sponsored by the Spitzman Jordan Family, this new piece of urban art is placed in the gardens of the Casino Estoril. 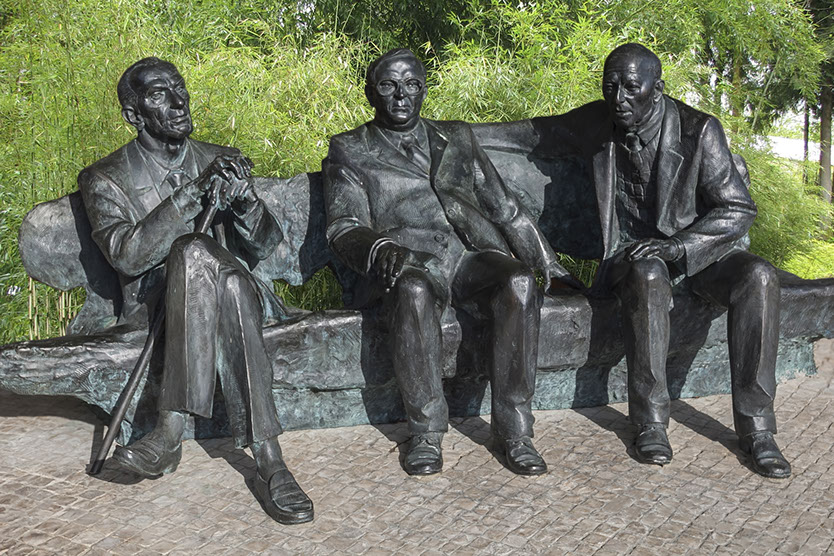 The André Jordan Group brought back the President of the Republic Cup, for the first time played at the Belas Clube de Campo. It had become a regular event between 2000 and 2005, organized in Vilamoura with the high sponsorship of President Jorge Sampaio. The actual President of the Republic, Marcelo Rebelo de Sousa, was present at Belas Clube de Campo: «We are here especially to honour André Jordan, who is a pioneer who understood what tourism was in Portugal sooner than the common mortal. We are here to thank you, to greet you for your persistence, your vision and your youth.»

More than a sports competition, the President of the Republic Cup aims to promote the image of Portugal as a travel destination and its best golf courses, while raising funds for private social solidarity institutions. In 2017 will benefit the Center for Education for the Citizen with Disabilities, based in Mira Sintra, which has 2500 users and more than two hundred employees.

The event was played by 74 invited players of different nationalities and was won by the pair composed by Ernâni Magalhães and Soren Pedersen. The Afonso Patrício Gouveia Cup, for the best lady in the competition, was awarded to Sharon Henderson. 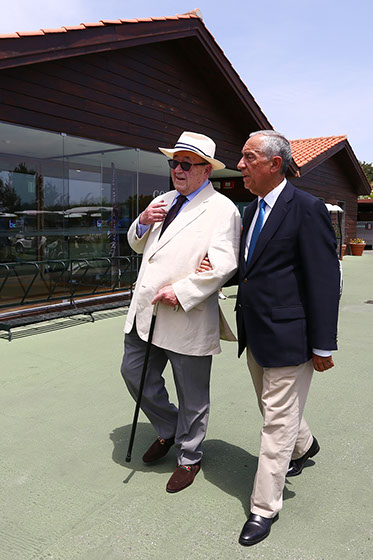 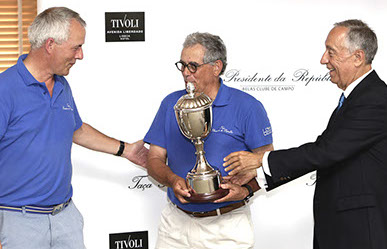 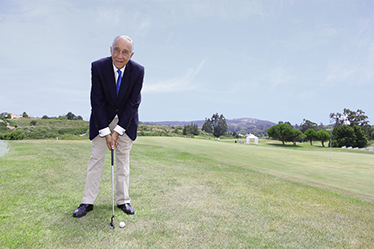 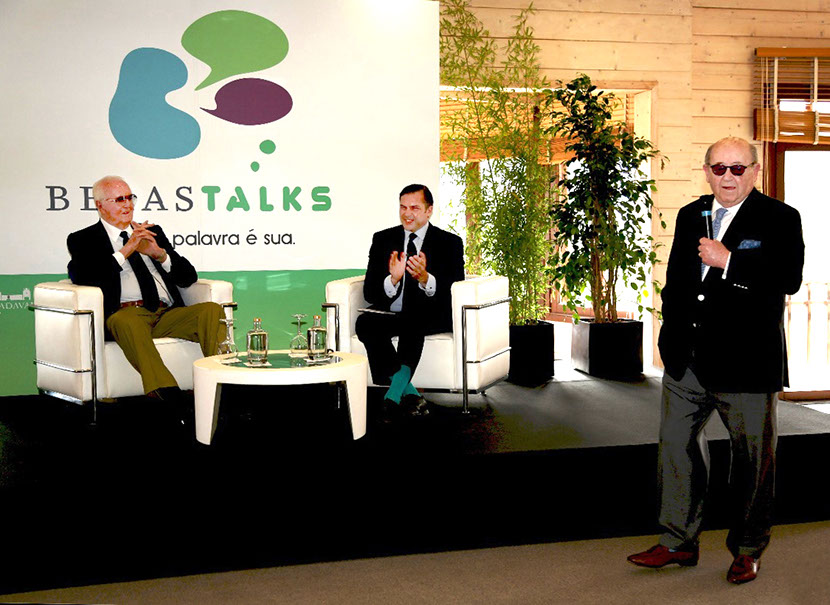 At the invitation of the Duchess of Cadaval and Andre Jordan, the great retired couturier Hubert de Givenchy, 87 years old, was at the Belas Clube de Campo for a lecture that enchanted the audience. Under the shape of an interview conducted by the Prince Charles Philippe d'Orleans, Hubert de Givenchy spoke in the Belas Talks programme about his life, career and mentioned some moments lived next to personalities such as Audrey Hepburn, Jacqueline Kennedy or his great idol and inspirer, Cristobal Balenciaga. In the audience, models, actors and fashion designers had the opportunity to hear words of great simplicity, making a brief portrait of a world where Hubert de Givenchy has left his mark as a «grand seigneur». Hubert de Givenchy visited Portugal for the inauguration of the exhibition «Unforgettable Wedding Gowns», open to the public until September 7, 2015, at the Palácio Cadaval, in Evora.

London, 5 November 2014 — André Jordan has won a prestigious World Travel Market 2014 World Travel Leaders Award in recognition of his contribution to tourism in the Algarve. The coveted award was presented  to André Jordan by Carina Monteiro (Publituris Editorial Director, left in the photo) and Kate MacBeth (WTM Head of Marketing and Communications, right in the photo), at the WTM World Travel Leaders Awards. The Awards give WTM’s Official Media Partners – which represent key travel industry media around the world – an excellent platform to congratulate and recognise those companies and individuals which have made significant contributions to travel and tourism in their region or sector. 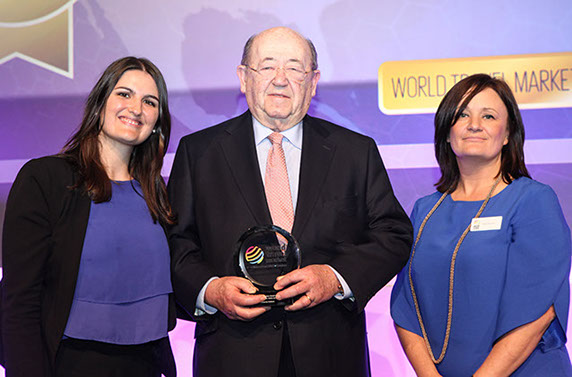 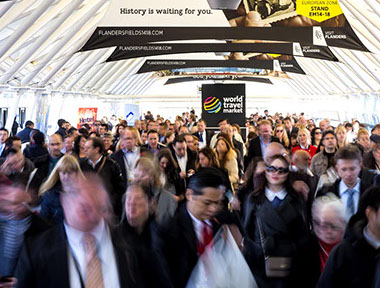 World Travel Market Director  Simon Press comment on the occasion about this award:  «André Jordan has been instrumental in helping develop the Algarve into the popular resort destination it is today.» Three nominations from each of WTM’s media partners were judged in September by a panel of three, consisting of an independent body, a representative of WTM and the relevant media partner. Other winners of the 2014 World Travel Leaders Award were the Association of Tour Operators of Russia, Roger Dow, US Travel, Air Canada and Easy Jet. World Travel Market, the leading global event for the travel industry, is the must-attend four-day business-to-business exhibition for the worldwide travel and tourism industry. More than 50,000 senior travel industry professionals, government ministers and international press, embark on ExCeL London every November to network, negotiate and discover the latest industry opinion and trends at WTM.