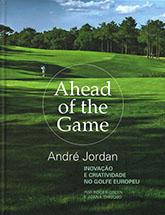 AHEAD OF THE GAME

Among the different activities that were a part of the reality of my businesses life, the world of golf has been the one that has given me the most satisfaction and, at the same time, least concerns, and the reasons are not hard to find. In a recent research carried out in the USA with regular golf players, it was verified that comradery, for the golfers, is the most important factor. The benefits of physical exercise and being surrounded by nature are secondary concerns…

Throughout my career I have had the good fortune to know wonderful people in the various project phases leading up to the construction of the golf courses, including the management and daily operations teams and, naturally, the players themselves.

When I thought of building a golf course in Quinta do Lago, my first project in Portugal, I asked my friend Jerry Wolk to introduce me to me a golf architect. Jerry, a lawyer and business man, had already been involved in the making of other golf clubs and was, at that time, president of the club he played in, in Great Neck, Long Island, in the New York State. He recommended Bill Mitchell, an American architect from New England, established in West Palm Beach, Florida, where the fields were drawn according to the traditional style of golf course design.

In his fields, artificial difficulties had no place, resulting in a fair test for the amateur players and, at the same time, a real challenge for the professionals. In love with the place, Bill had the wisdom to adapt this concept to the terrain and landscape of Quinta do Lago. He was a disciple of Dick Wilson, the first great golf architect to be acknowledged in the USA, after the Second World War. Bold and innovative, he stood out for an open and modernist design, that became a synonym of this new era, characterized by compact lawns, broad fairways, big greens that properly receive the golf ball, and strategically placed bunkers.

I have decided to adopt the philosophy of the Dick Wilson school through my architects, since all of them had worked with him; Jo Lee and his partner Rocky Roquemore and, later, Ed Seay, the architect that worked closely to Arnold Palmer for more than 35 years. Martin Hawtree, the English golf course architect that designed the Millennium Golf Course, was the exception. This style, that nowadays has its biggest exponent in Arnold Palmer, significantly contrasts with the more elaborate and least natural approaches made by some of the more renowned architects today. It was born from the British formula of golf course design and its ex-libris is probably found in the USA, in the extraordinary Augusta National Golf Club, in the Geogia State, designed by Alister Mackenzie.

I believe that this is the key for the success in the designing and building of golf courses, which brought recognition to the Portugal fields throughout the times. We have been organising a countless number of extraordinary and memorable events, for professionals and for amateur players, and receive important try-outs for a great number of clients. We have been watching the extraordinary development of Golf in Portugal. The number of young people being initiated in the practice is growing, and we can meet more and more women regularly playing in the fields.

In four decades, approximately five million golfers played in the fields that we created or that we manage. And many of them return more than once. Others invested in the communities that we built, acquiring their habitation or second home, thus taking advantage of the warm climate and the hospitality of the Portuguese people.

* «Ahead of the Game» book preface adapted for this website